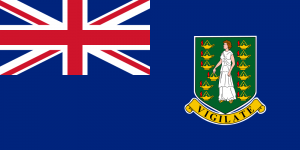 The British Virgin Islands comprise around 60 tropical Caribbean islands, ranging in size from the largest, Tortola 20 km (12 mi) long and 5 km (3 mi) wide, to tiny uninhabited islets. They are located in the Virgin Islands archipelago, a few miles east of the US Virgin Islands. The North Atlantic Ocean lies to the north of the islands, and the Caribbean Sea lies to the south. Most of the islands are volcanic in origin and have a hilly, rugged terrain. Anegada is a flat island composed of limestone and coral is geologically distinct from the other main islands of Tortola, Virgin Gorda and Jost Van Dyke and rest of the archipelago. [Source: Wikipedia]

Just a 30 minute ferry ride from St. Thomas in the USVI, or a 30 minute plane ride from San Juan, the stunning islands and cays that comprise the British Virgin islands have two great assets – accessibility and virgin beauty. Known for years as a “sailor’s paradise,” yacht cruisers were among the first to realize this was indeed one of “Nature’s Little Secrets.” 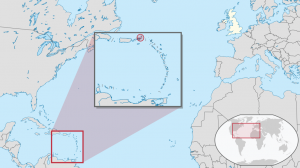 Tortola is the largest island and seat of government of this mountainous archipelago of gemlike isles. Virgin Gorda, Ginger, Cooper, Salt, Peter and Norman lie to Tortola’s south, while Guana, Camanoe and Jost Van Dyke to its north. Dozens of smaller islands, some with resorts, some unpopulated, lie between; Anegada, the only coral atoll in this island chain, is to the northwest. The BVI is a picture of contrasts. There are protected anchorages in quiet palm-fringed coves with spiraling sheer rock faces that plunge to the ocean. From island to island the vegetation can be dramatically different due to rainfall, soil composition and sun exposure. Lush areas support palms and tropical fruit trees like banana, mango and key lime, along with flowering hibiscus and bougainvillea. A hike up a hill may reveal varieties of cactus, wild tamarind and fragrant frangipani.

The surrounding waters are deep shades of liquid blue, but on Anegada, the waters takes on an ethereal aquamarine shade. A varied and intriguing environment on land and on sea makes these islands appealing to divers, boaters, hikers and those desiring just to relax in a soft rope hammock overlooking a white sand beach.
Culture and history walk side by side on these islands. Amerindians populated them 1,000 years ago and their presence remains in some of our foods like cassava and sweet potatoes, and in our language – hurricane and canoe are among the words that are still in use today. Influences can also be felt today from the Dutch and British settlers who first came here in the mid-1600s. One can still view the stone remnants of forts, rum distilleries and churches dating back to the 18th and 19th centuries. Cultural influences can be felt through the islands’ music and food – whether it be indigenous fungi, reggae or steel pan, or the taste of local savory chicken, fish, conch and lobster dishes enhanced with exotic spices. [Source: BVI Welcome] 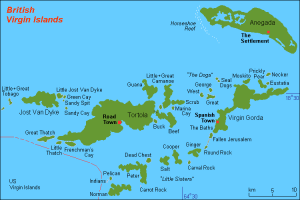 The British Virgin Islands enjoys one of the more prosperous economies of the Caribbean region. The “twin pillars” of the economy are tourism and financial services. Politically, tourism is the more important of the two, as it employs a greater number of people within the Territory, and a larger proportion of the businesses in the tourist industry are locally owned, as are a number of the highly tourism-dependent sole traders (for example, taxi drivers and street vendors). Economically however, financial services associated with the territory’s status as an offshore financial center are by far the more important. 51.8% of the Government’s revenue comes directly from license fees for offshore companies, and considerable further sums are raised directly or indirectly from payroll taxes relating to salaries paid within the trust industry sector (which tend to be higher on average than those paid in the tourism sector). [Source: Wikipedia] The economy, one of the most stable and prosperous in the Caribbean, is highly dependent on tourism generating an estimated 45% of the national income. More than 934,000 tourists, mainly from the US, visited the islands in 2008. In the mid-1980s, the government began offering offshore registration to companies wishing to incorporate in the islands, and incorporation fees now generate substantial revenues. Roughly 400,000 companies were on the offshore registry by year end 2000. The adoption of a comprehensive insurance law in late 1994, which provides a blanket of confidentiality with regulated statutory gateways for investigation of criminal offenses, made the British Virgin Islands even more attractive to international business. [Source: World Factbook] 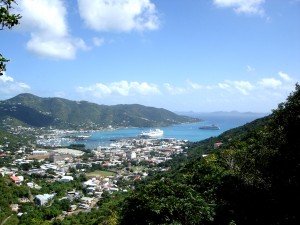 American Corporate Services offers experience and expertise for astute investors who wish to establish offshore businesses. Whether an investor wishes to immigrate or simply to establish a business entity, our network of professionals has the ability to advise, assist, direct and enable clients to understand and navigate the process for BVI company formation.

Our services include everything you need for starting a new business in the BVI. In addition to helping to establish a BVI business bank account, helping you set up your business to conform to BVI accounting standards and to comply with BVI taxes, we also offer boutique amenities such as BVI secretarial services. We can even help you to create a BVI virtual office that will appear to others as though you are actually in the BVI, even though you may be just about anywhere else on the globe at the time. Our business is making your investment a success.